A Taste of Omani Cuisine at Bait al Luban, Muscat

on 20.1.18
We ate a lot of very good food whilst in Muscat but the food at Bait al Luban was possibly the best of the whole trip. I mentioned in a previous Muscat post that we didn't do a great deal of research pre-trip but we did hunt out a few eating recommendations and this restaurant was one of those.

Bait al Luban is right opposite the fish market in Mutrah, above a bank in a former guesthouse built approximately 140 years ago. When we first arrived (we opted to go at lunch time) we weren't actually sure if it was open or how to get in but we soon found the entrance to the restaurant around the side of the building. When you enter you'll find a flight of steps (there is a lift too) which takes you up two or three floors to the top of the building. It was worth double checking despite those initial doubts as when we arrived at the top we were warmly greeted by staff. The restaurant is decorated in a traditional style with the choice of both seating on the floor or seating at tables, they also have a balcony which we opted for. This gave us views across the corniche, the chance to watch the world below us and the comings and goings from the fish market. When we first settled down we were the only ones outside but we obviously started a trend as by the time we were ready to leave the balcony was pretty much full with diners. 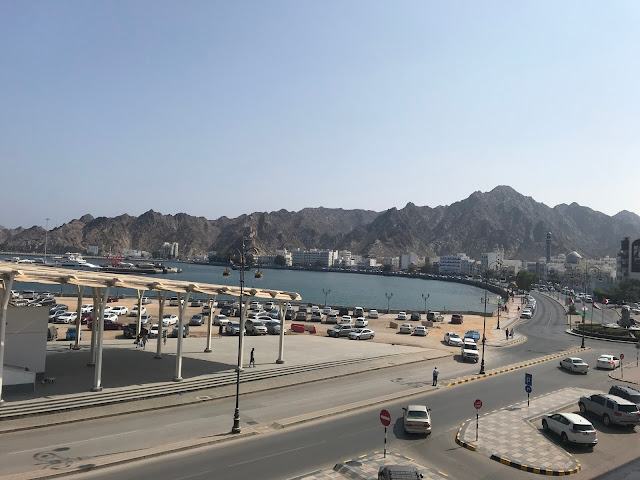 Our lunchtime view from the restaurant in the photo above and below an evening view of the same area from a location just a little further along the corniche. 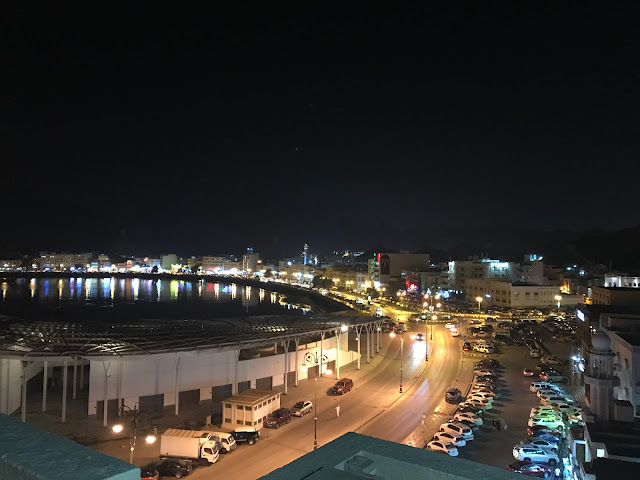 Once we were seated we were immediately brought a glass of frankincense infused water, a first for me. The water was a little cloudy in appearance and tasted, as you might expect, slightly perfumed but it certainly wasn't unpleasant. I didn't know it at the time but al luban means frankincense and as a lot of frankincense comes from Oman it makes sense that they embrace that part of their heritage too. I have also since learnt that it is quite a common drink in Oman so love the fact we got to try some whilst we were there.

We'd read beforehand that this place served genuine Omani cuisine, it certainly was really good food and, as I said, the welcome we received was fabulous. The food seemed to be mainly a mix of Arabic influenced dishes with Indian influences which matched with what I had read about Omani cuisine beforehand. As we wanted to try more than just one dish each we opted to share a couple of dishes and chose the shuwa and saloonat dijaj. The shuwa, lamb served with rice, was described on the menu as a classic Omani celebration dish. There are several versions of this dish from different countries in the Middle East, in all cases it is slow roasted and in Oman is traditionally wrapped in date palm leaves before being submerged in an underground firepit to cook. The version we had was lovely and full of flavour.

Our other main dish was the saloonat dijaj, a tomato based chicken curry. This was really good and I think in the end we both preferred this just a little to the shuwa mainly because it had the sauce but honestly both were delicious choices. Sharing these two plus some pakoras to start was the perfect amount for us for lunch and we still had room for dessert too. My husband generally doesn't have much of a sweet tooth but we both picked mango flavoured ice cream, not traditional at all obviously but the perfect sweet note to finish the meal on. If you want a more traditional dessert though there are plenty on the menu to choose from. The meal still wasn't quite finished because, as is tradition, we were then served some dates and Arabic coffee. The restaurant doesn't serve alcohol but I had an amazing lemon mint fresh juice, I'd had similar in Dubai and really enjoyed them. I love sharp zingy drinks so this hit the spot for me. 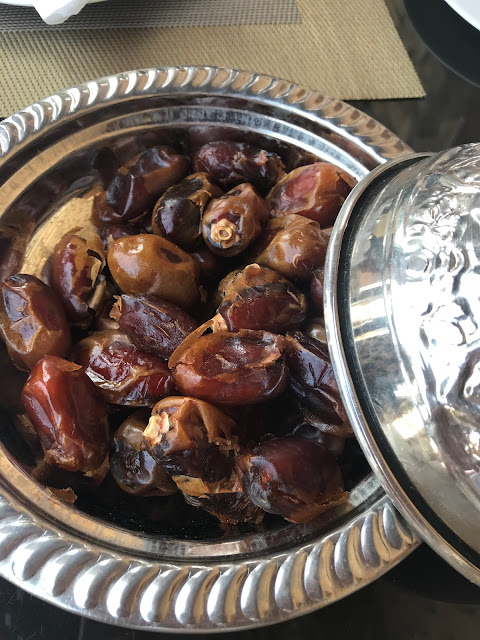 As I've mentioned, I think, in nearly every post I've shared about our visit to Muscat the hospitality and kindness of everyone we met was second to none, from the man in his car who just pulled over to check we weren't lost to the lady who let us share her taxi, and here at Bait al Luban was no exception either. The staff were attentive throughout and even as we left we were given rose water handwash to clean our hands which also smelled divine.

As I mentioned previously we dined at lunchtime and got a table very easily but it would make a great place for dinner too, though it may be worth making a reservation if you're going then as I imagine it's pretty popular. If you are visiting Muscat this restaurant should absolutely be on your list of places to eat in.
coast food Muscat Oman places to visit restaurant things to do travel
Location: Al Mina St, Muscat, Oman