Cammo Estate is a place I'd seen from across fields whilst on journeys to and from the airport and it was somewhere I'd always been a little bit curious about. From that road all you can see is the tall water tower and having read that there is nothing really left now (and knowing how much I love a ruined or abandoned place) my curiosity was piqued and I wanted to visit. It ended up taking me quite awhile to get there for various reasons but with our travel, until recently, limited to just Edinburgh it suddenly seemed like the perfect opportunity to finally go.

The estate was once the home of Cammo House reputedly a grand house but sadly, except for a few ruins, no longer standing. The house was built for John Menzies, the then owner of the estate, in 1693 and it originally contained twenty rooms all with fires. It was designed to over look extensive grounds with its surrounding parkland later laid out with avenues and formal gardens by Sir John Clark of Penicuik a Scottish politician, lawyer, judge and composer. Various extensions and improvements were added by its subsequent owners and by the 1800s it was a fine country mansion containing more than fifty rooms. The house is thought to have been the inspiration for House of Shaws in Robert Louis Stevenson's novel Kidnapped.
The house remained in private ownership until the 1970s, its final chapter coming when Margaret Louisa Tennent bought it in the early 1900s. She had inherited her father's fortune from his sheep farming in Australia and when her marriage broke down, Margaret and her two sons remained in the house. They subsequently went on extended travels to New Zealand, Australia and Japan but at some point on this trip she fell out with her eldest son who refused to come home and went to live in the United States. Margaret promptly wrote him out of her will, continuing to live with just her younger son at the house.
Margaret and her youngest son Percival led a reclusive life at Cammo rarely leaving other than to buy groceries and shop at the Jenners department store in Edinburgh's city centre. Margaret earnt herself the nickname the black widow as she was always seen dressed from head to toe in black. She died in 1955 and was apparently buried in the grounds of Cammo estate, this was believed to be the last interment on private land in Scotland. By this time the estate was pretty run down but was still estimated to be worth £500,000 when it was inherited by Percival. For the remainder of his life he let the house fall into further disrepair allowing his thirty dogs to have the run of the house whilst he stayed in the lodge house with the tenant farmers who lived there. The house became a regular target for looters which Percival did little to stop and when he died in 1975 the house was bequeathed to the National Trust for Scotland. The house was deliberately set on fire twice by vandals in the late 1970s and was eventually partially demolished due to its unsafe condition in 1979. The National Trust gifted the estate to Edinburgh council for £1 in 1980 and they founded the UK's first wilderness park in the estate grounds.
We drove over to Cammo and were able to park in the small south car park (it's definitely small and was quite busy on our weekend visit) and from there it's a very short walk into the estate grounds. The water tower, which I'd seen so many times from the road, is just to your left as you enter and in front are the remains of what were once the estate stables. The four storey tall water tower was built in the 19th century, sometime between 1819 and 1823, and was designed to supply water to the Cammo estate, including the house, the farm steading and the stables. When in use it was powered by wind (I can confirm that it's definitely well placed for that in the windy exposed spot it occupies) and used sails like a windmill to transfer the water. The tower isn't accessible now and is only home to roosting birds but it is worth the short detour across the field to see it close up.
Back in the estate grounds and, as I said, the first building you see is the former stable block. In comparison to the main house (and some other out buildings nearby) this appears fairly intact at first glance, although it is minus its roof and as you can see in my photo above there is signage warning people to keep out. The stables were constructed in 1811 and would have housed about seven horses. They were built by James Watson who also built the water tower and was responsible for some alterations to the house.
Just a short distance on from the stables are a couple of almost completely ruined buildings. It's hard to work out what they were originally but it's believed they could have been two cottages, most likely home for gardeners and later possibly coachmen. One of the ruins has evidence of small openings in its wall which may have been feeding spaces for cows. I'm not certain but those openings may be the low windows that you can see in the building on the left in my photo below. There is also evidence here of the ruins of pig sties. As a visitor whilst you can't see much now this area is a spot to stop and think about what the estate must have been like in its heyday with gardeners, farm workers, grooms and coachmen running around keeping the estate running.

There are signposts dotted around the estate pointing you towards the key features and we were shortly heading into what is left of the walled garden, another space that I imagine would once have been teeming with life. The walled garden was constructed between 1780 and 1782 by Charles Watson the then owner of Cammo Estate. Alongside the walled garden the estate also had an orchard by 1805, and at its height the walled garden, orchard and glasshouses combined supplied Cammo house with all its fruit and vegetables throughout the year. By 1918 though it was no longer a functioning garden and it gradually became overgrown and derelict. There isn't a lot there now to see what the garden may once have looked like but I've read it has since become famous for its snowdrops that bloom here in the early part of each year.

I didn't take any photos of this but in the gardens you'll also find a canal. Canals were fashionable in gardens in the 18th century but there are only a handful of them in Scottish gardens. Something to look out for on your visit. 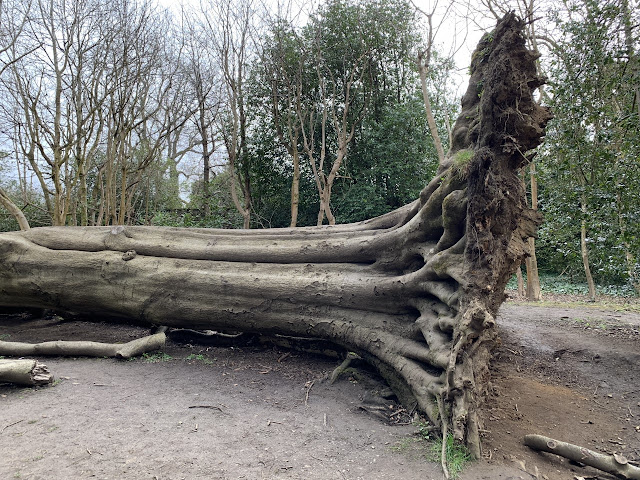 Finally we reached the sparse remains of the house itself. Compared to other buildings in the estate there isn't much left of it at all, other than the main entrance and part of the front and side ground floor walls. It's really hard to imagine it being a grand house now or to get any sense of how big it was but if you search on the Internet you can find a few old photos of it. I can't pretend that I don't wish I could travel back in time to see it before it was run down and demolished though.

Despite hardly anything of the house remaining it is this part of the surrounding grounds that seems to have retained a little more of the grandness and appearance of those landscaped gardens. To the side of the house are the remains of the pinetum, home to some yew trees and various conifers. Walking away from the remains of the house and back to the car park a vast tree lined entrance way towards the house became more apparent. It might be grassed over now but must have once provided a stunning approach to the house. 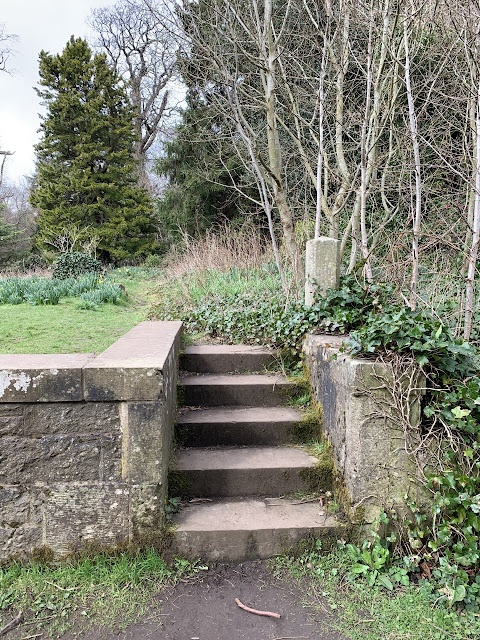 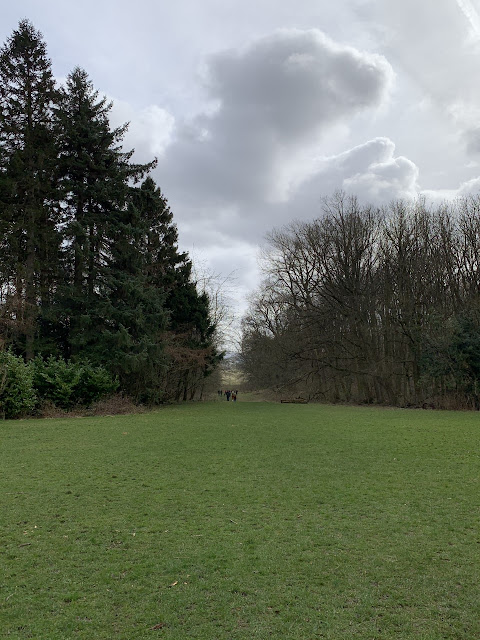 Looking from and back to the remains of the house 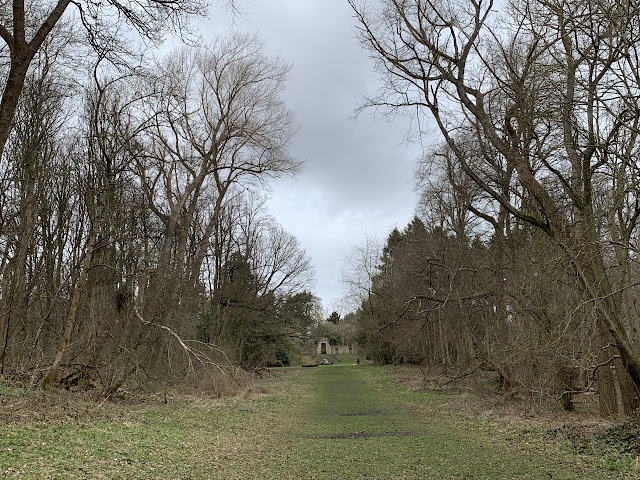 It's a shame the house is no longer standing and that it had such a sad end as well. Being a lover of abandoned places I wish there was still a little more left to see. I can't help but wonder too what happened to everything in the house that was stolen in later years and did anyone even know what was in the house and what was taken other than its reclusive owner. Despite there not being a house there however the estate is still a fascinating place to walk around. A place to explore and let your imagination conjure up images of what it might once have been like, a place for nature lovers and a space to get away from the city.