From Edinburgh there are plenty of places that are very easy to reach for a day trip and if it's close to the city there's a good chance you'll also find yourself on the coast. Obviously with the current travel restrictions that are in place travel further afield is having to wait a bit longer but when we can I'll definitely be heading off somewhere. One of these easy to reach little coastal towns close to Edinburgh, that I went to for the first time last year (when we could do), and that you might want to go to as well is Dunbar in East Lothian.

Dunbar is a former royal burgh, becoming so in 1445. A royal burgh was a type of burgh (usually a city or town) founded by or subsequently granted a royal charter, royal burghs were abolished in law in 1975 but the term is still used by many of the former ones. The town has roots going back much further than that though. There is evidence of an Iron Age promontory fort, typically a defensive structure located above a steep cliff which is often only connected to the mainland by a small piece of land. Later it became part of Anglian Northumbria when that kingdom expanded in the 6th century. The Northumbrian monk and scholar, St Cuthbert (who is said to have founded St Cuthbert's church in Edinburgh) is believed to have been born near Dunbar. Eventually though Dunbar fell under Scottish control and in 1018 was acknowledged as a part of Scotland.
One of Dunbar's main points of interest is its ruined castle standing at the entrance to the harbour which, following a partial collapse in 1993, is now sadly too dangerous to access. Whilst it might be a ruin now it was once one of the strongest fortresses in Scotland. The Votadini, a Celtic people of the Iron Age, are believed to have been the first to defend this site. The town's original name, dyn barr (its original Brythonic name in the Celtic language) means 'the fort of the point'. The first stone castle on the site is thought to have been built by Gospatric, Earl of Northumbria after his exile from England in 1072.  Several more fortifications were built on the site following that first one with the last one being deliberately damaged in 1567.
Its location, not unsurprisingly, has seen it attacked by the English several times throughout its history, unsuccessfully in 1214, Edward l had better luck in 1296 and Edward ll sheltered there after the Battle of Bannockburn in 1314. Its most famous moment came in 1338 though when Agnes Randolph of Dunbar or 'Black Agnes' as she was known commanded the successful defence of the castle during a five month siege by the English. Later in its history Mary, Queen of Scots made a brief stay there after fleeing Edinburgh following the murder of David Rizzio in 1567.
Its final slight (intentional damage) was ordered by the Parliament of Scotland, Dunbar was to be, 'cast down utterly to the ground and destroyed in such a way that no foundation thereof be the occasion to build thereupon in time coming'.  It's final indignity however actually came in 1844 with the construction of the Victoria harbour. A new entrance for the harbours (Dunbar has three!) was blasted through the end of the rock where the castle stands. 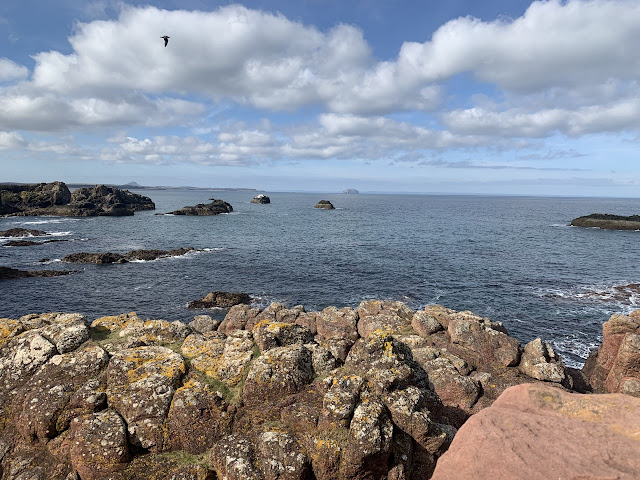 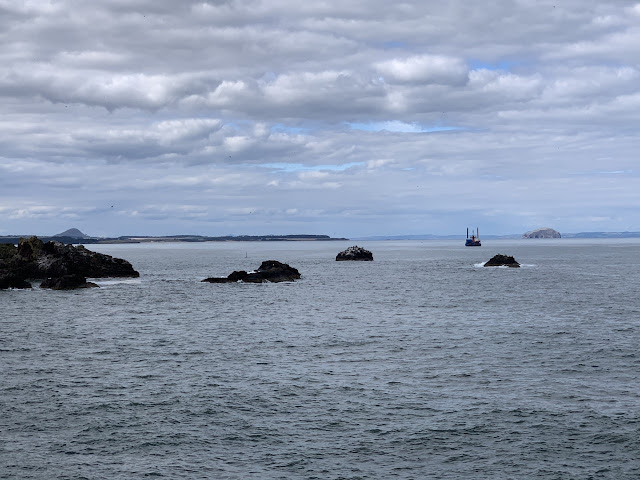 Opposite the castle on the other side of the harbour stands the battery which gives great views out over the Forth of Firth. The battery overlooks the original harbour and was built to protect the town from privateers in the 18th century. It looks like it's had a fairly recent makeover with information boards, key dates and notable events throughout its history carved into various points in the ground as you walk around as well as what looks like a small visitor centre. Though as I've only visited Dunbar at points in the past year where we could travel a little further but lots of places were still closed I'm not completely sure what is in there. The views though are spectacular looking out across the little islands and rocks that jut out of the sea in this area, including the famous Bass Rock. Likewise if you know your seabirds from here you're very likely to be able to spot a large variety of different ones. 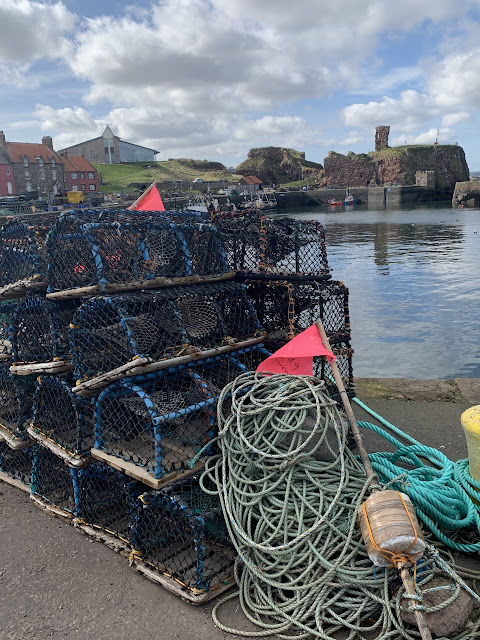 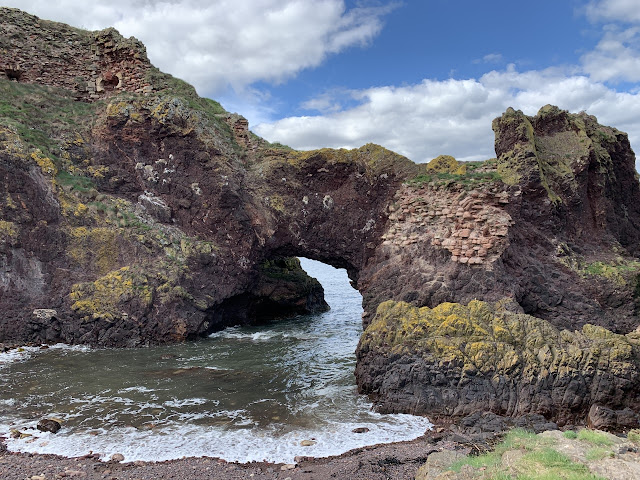 On my first visit to Dunbar last year I took the train so before I arrived at the harbour area I got to walk up the main high street of the town. Unfortunately with a combination of shops etc. not having fully opened up following the end of the first lockdown and, I think, maybe because it was a Monday a lot of the cafes etc. were closed but it looks a nice little spot to explore when places are open again. There is also the John Muir's birthplace museum which on both my visits has been closed as well.

John Muir was a naturalist and preservationist, whose family emigrated to the United States in 1849, despite spending most of his life in America though he always remembered his Scottish roots and apparently never lost his Scottish accent either. I actually first came across his name when one of my colleagues at work told me about him prior to our visit to California in 2019, he had a home there and was largely responsible for the establishment of the Yosemite National Park. Whilst we didn't get there seeing his name again, thanks to his childhood links to Dunbar, reminded me once more of that conversation and of those previous travels we'd enjoyed. 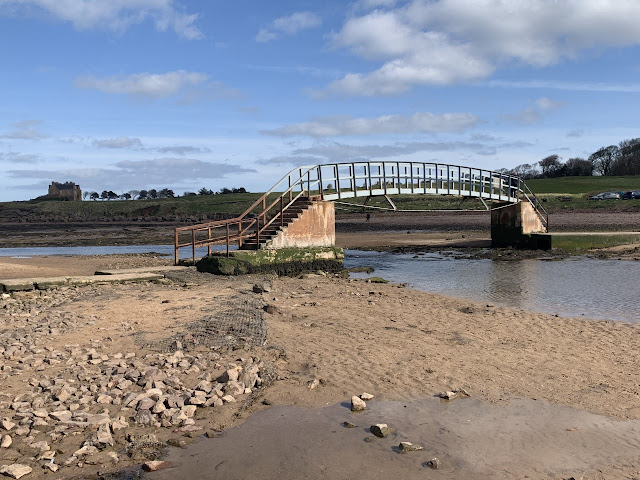 One final place close to Dunbar that we got to on our second visit (this time we went by car) was the famous 'bridge to nowhere'. I have to admit that I'd seen many photos of this bridge and for some unknown reason had always assumed it was somewhere much further north. After that first visit last year I saw another photo of the bridge and discovered that it was in fact near Dunbar and therefore somewhere we could get to at some point.
The bridge to nowhere or, to give it its actual name, Belhaven bridge provides access across the Biel Water at low tide to reach the vast sandy beach at Belhaven Bay which gives more great views out into the Forth Estuary. The bridge acquired its nickname because at very high tide the sea completely surrounds it cutting off access and making it look like it literally goes nowhere.
If you visit the beach it is a good spot for a walk (it's also a popular spot for surfing apparently) and some sea air, though that metal footbridge with its criss-cross pattern of tiny holes beneath your feet is clearly not popular with some dogs. We saw several owners that day having to carry their dogs (of all sizes) across it who were refusing to or were too scared to step on to the bridge and walk on it with all those tiny holes. 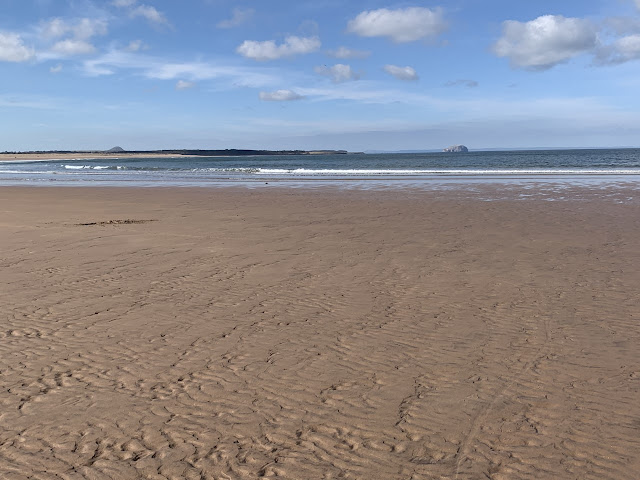 Dunbar might not be quite as bustling as its near neighbour North Berwick (though as I've only visited in the time of Covid-19 restrictions perhaps I'm being a little unfair) but for a day away from Edinburgh it's still definitely worth exploring and is easy to reach both by car and train. Dunbar is apparently one of the sunniest and driest spots in Scotland making a visit even more appealing. Getting out of Edinburgh now and again is always good (even if Edinburgh is gorgeous) and once restrictions are eased a little more and allow us to go a bit further afield days like this will be appreciated even more by me.