on 12.11.19
Prague is full of quirky features and interesting street art, so much so that to wrap up my Prague posts I decided they needed one all of their own.

One steep street you're very likely to walk (or maybe climb) along, particularly if you head towards the castle is the Nerudova. The street is as picturesque as most of Prague is but what makes this a little different from most other streets in the city are the house signs that remain on many of the buildings. Until numbering was introduced in the 18th century these signs and house names were the only way to identify buildings in Prague. There are more of these signs preserved on this road than along any other and they include buildings known as the Two Suns and the Three Fiddles, thanks to its history of at one time hosting a family who made violins. As well as these there are many more including one with a golden key above it and another with the Devil over it. Take the time to look above the doors as you walk along this street and see how many you can spot. 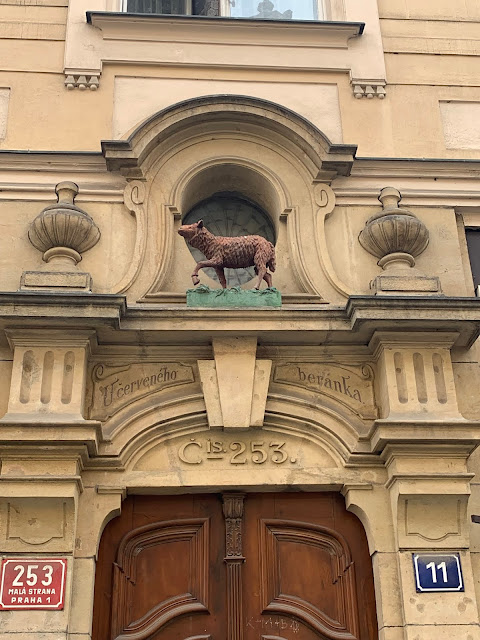 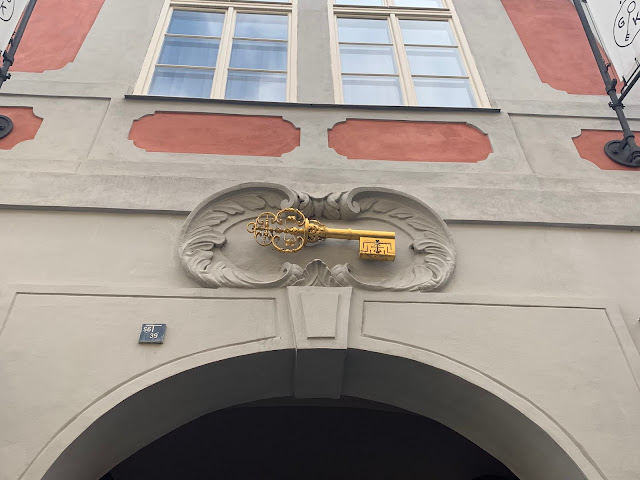 When I spotted the little fellow below I wasn't sure who he was but thought it was fun and quirky looking, if not a bit grumpy and just like he was about to jump into the river. Thanks to a post of this very same spot on an Instagram account I follow I've since learnt that this is actually a water sprite known as a vodnik. He is always to be found near water and it turns out is not a very nice sprite as he usually does harm to people doing things like blocking mill wheels or catching inexperienced swimmers. Vodnik's can also transfigure into other animals as another way of luring people in order to catch their souls. Perhaps if I'd realised just how evil this water sprite was I wouldn't have taken his photo. 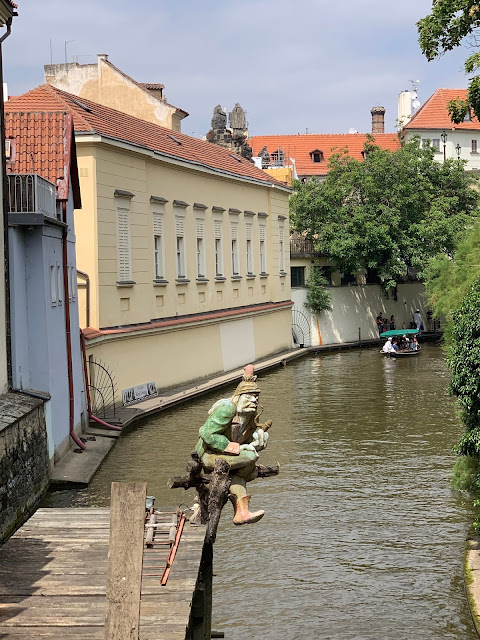 Prague's TV tower, the Žižkov television tower is the city's tallest landmark and was built between 1985 and 1992. We didn't really get any closer to it than my photo below but if you want to you can visit it and enjoy the views. It is also known for the baby sculptures climbing up its sides. The sculptures by David Černý were first placed there as part of an installation called Miminka in 2000 when Prague was the European Capital of Culture. At the end of the year the installation came down but after a public outcry they were reinstated as a permanent part of the tower. They don't have faces rather what some think look like USB drives leading one interpretation of the artwork to be a commentary on our over-dependence on media for sustenance, but that's only one point of view. What do you think? As well as the ones on the tower there are also a couple in Kampa park close to the Kampa museum on the bank of the Vltava river, so if you can't get out to the tower to see them take a trip here to get even closer. 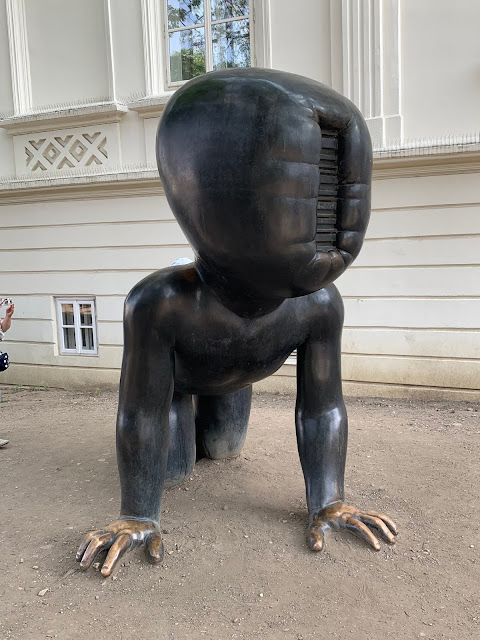 This line of yellow penguins are also on the edge of the river in Kampa park just a few steps from the babies. Whilst they may look cute these thirty-four penguins are there to share a serious message about the environment and the dangers of climate change and plastic consumption. The penguins are all made from recycled bottles and were created by a Milan based art movement, the Cracking Art Group. The group hopes that by re-purposing this plastic they will inspire more dialogue about plastic waste and its impact on the environment. 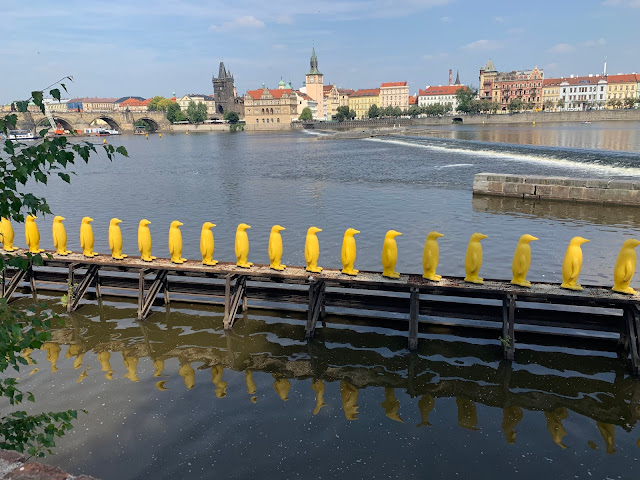 Did you know that Prague also has a Cubist lamp post? Well if you didn't you do now and that's it in the photo below. Handily it's also very easy to find being down a little side street close to Wenceslas Square. There are a few examples of Cubist architecture dotted around the city, a movement that flourished in Prague from 1911 to 1914 until the First World War stopped its development but this is the only lamp post in this style in the world. The Czech architect, Emil Králíček designed it in 1913 and if nothing else it's worth hunting out so you can say you've seen the only one of its kind. 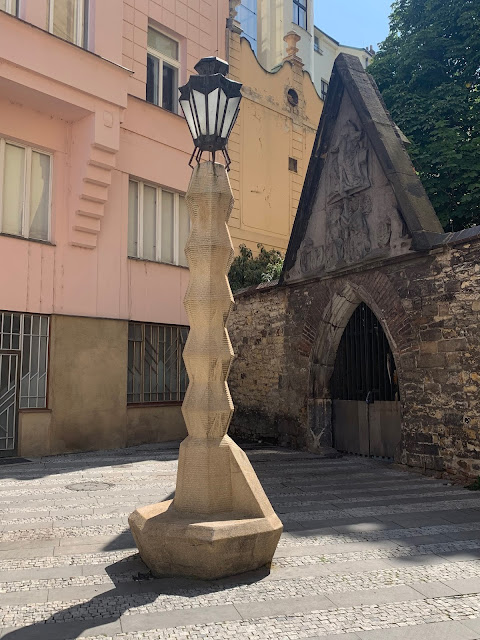 There are a couple of statues of men hanging above streets in Prague, one of which is Sigmund Freud which I've only now discovered I missed. I can't help but wonder if we actually walked underneath it oblivious to it hanging above us. I know I definitely didn't see this one below the first time we walked along this street and only spotted it by chance as I looked up at just the right time on another evening. This statue honours Alphonse Mucha, one of the city's most famous artists. 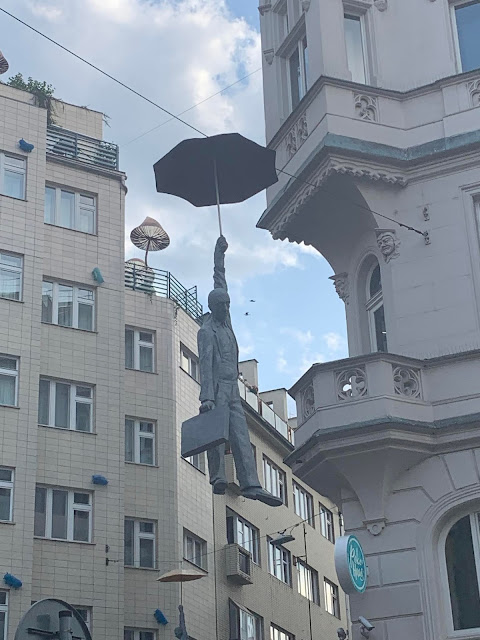 Prague is a city full of fascinating pieces of artwork, I only found a few and know now that there are plenty of others we either missed or didn't get any photos of. If you're visiting the city take the time to explore this side of Prague as well, whatever your tastes I'm pretty sure you'll find something to appreciate and admire.