on 14.10.18
The end of September brings Doors Open Day (well weekend really as various places open up on both the Saturday and Sunday) to Edinburgh, it was my third Doors Open Day here and, as last year, I decided to explore more than one place over that weekend. Actually I had a slightly different plan originally but as that didn't quite work out as I had hoped I changed it to one that focused on exploring some of the buildings in the New Town that I walk past almost daily.

First on the list was the Merchants Hall on Hanover Street. The Merchant Company was founded in the 13th century to protect their monopoly, fend off illegal competition and provide mutual support to each other. After a couple of moves to various parts of the city they purchased their current home on Hanover Street in 1879. 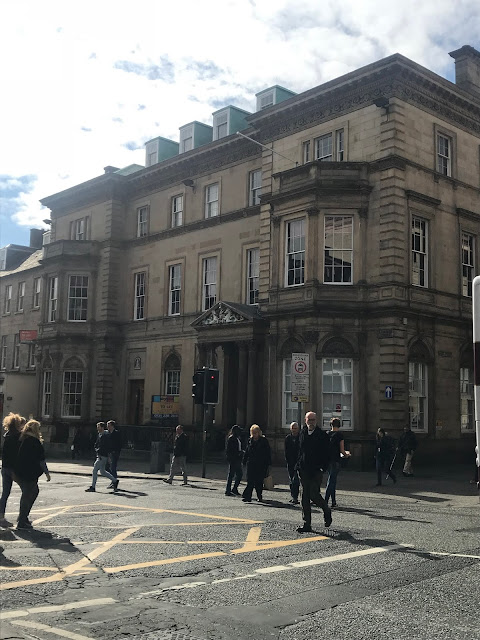 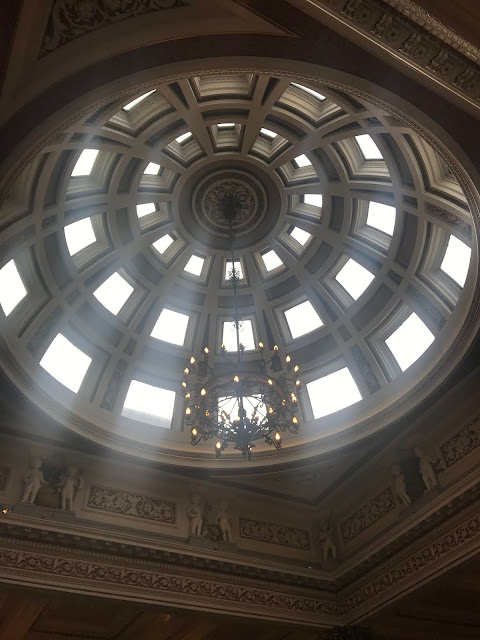 As visitors on Doors Open Day we got to see several rooms beginning with the Main Hall filled with paintings and busts of various influential people from throughout the history of the Company and its centrepiece, the splendid domed roof. The frieze below it, which you can see a little of in the photo above, represents the first merchants and the industries they worked in. Our mini tour also took us upstairs to some more formal rooms which were once more filled with paintings and photos of past members and eventually downstairs to a small exhibit of the Company archives.

The Basement and Archives and Treasures room, as the name suggests, is filled with documents etc. detailing the history of the Company, this included photos, old uniforms from both the schools the Company own and support and robes that members wear at official occasions, as well as an array of booklets, programmes etc. from school and other events. It was an interesting place to have a look around and find out a little more about, especially as it's somewhere I've walked past countless times but in reality barely knew was there or what they did beforehand. 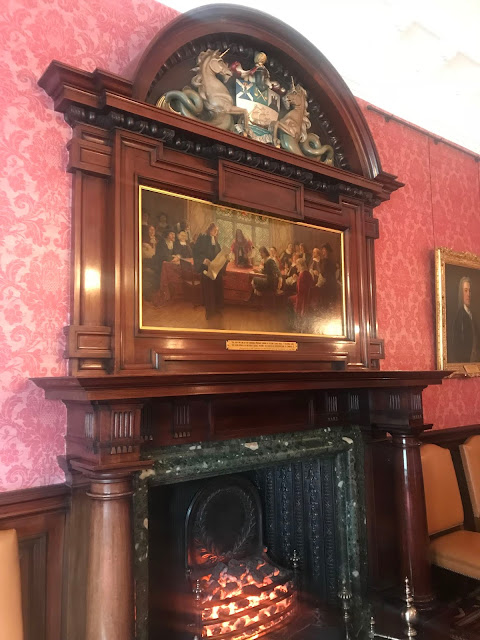 Up next, and handily just across the road, was the Royal Society of Edinburgh. The RSE was established in 1783 and created by Royal Charter from King George III for 'the advancement of learning and useful knowledge'. Just like the Merchants Hall it has had a variety of homes around the city but took its current home on George Street in 1909. Since then it has expanded further and been refurbished and modernised several times. It is an educational charity with a Fellowship that includes individuals from the worlds of Science and Technology, the Arts, Humanities, Social Science, Business and public service. 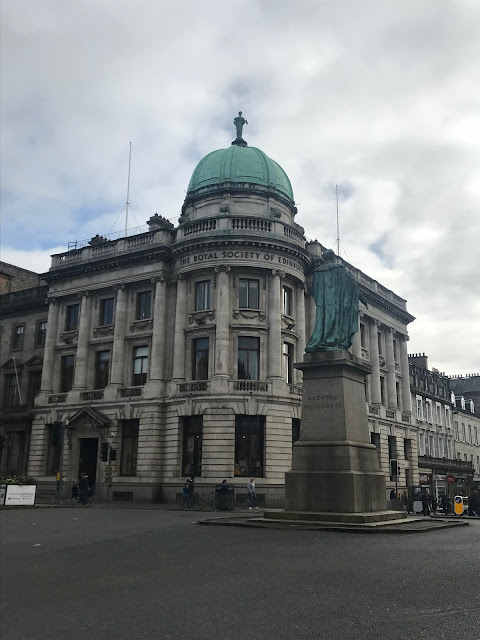 The self-guided tour that we followed took us to several of the rooms giving us the opportunity to see both the more recently refurbished parts which allow the rooms to be used for all types of events, as well as those that have retained the more traditional original style of the building. On the tour around I learnt that many of the rooms are named after Fellows, one of those we got to see was the James Clerk Maxwell room. He was a scientist who formulated the theory of electromagnetic radiation and you may know also has a statue in his honour at the St Andrew Square end of George Street. In this room there is the chance to see a holographic stereogram of this same statue, if you get the chance to visit at some point make sure you stand in just the right spot to view this interesting addition to the room. Many of the rooms also include portraits and busts of various Fellows, just like the portrait below of Sir Walter Scott, RSE President from 1820 until 1832.

Especially for Doors Open Day several of the rooms had special displays about the RSE and what it does, the various programmes that they run including their schools programmes and a detailed history of the RSE. Visiting here concluded my Doors Open Day visits for the Saturday but I'd already decided by then that despite a holiday coming shortly afterwards and a whole lot of things I needed to do before heading off I could squeeze in just one more place on the Sunday.﻿

These rooms on George Street were my final Doors Open Day visit of the weekend and were definitely the grandest of the three. I could totally imagine some characters from a Jane Austen novel arriving here for a society ball back in Georgian Edinburgh. The rooms opened in 1787 fittingly, given my Jane Austen analogy, for the Caledonian Hunt ball. It was originally used solely for social gatherings but now is also used as an arts venue and for public events. As with the other places I visited we only got to see a little but I suspect we definitely saw the grandest of the rooms with the beautiful chandeliers, gold leaf and gilt mirrors everywhere I turned. These were definitely the highlight of the weekend for me and if they take part in next years Doors Open Day you should definitely think about having a look if you are in the area. 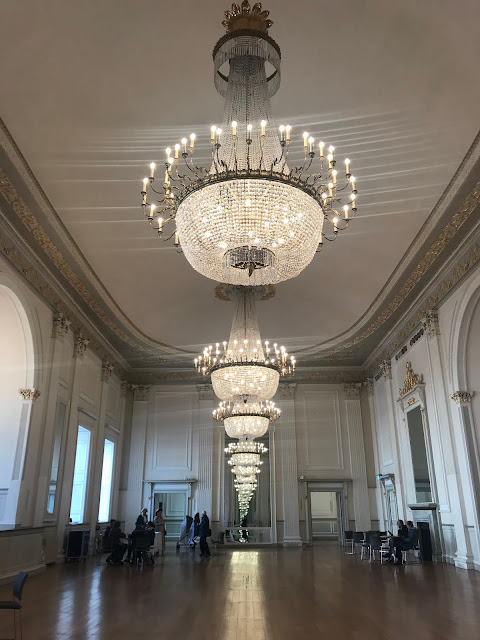 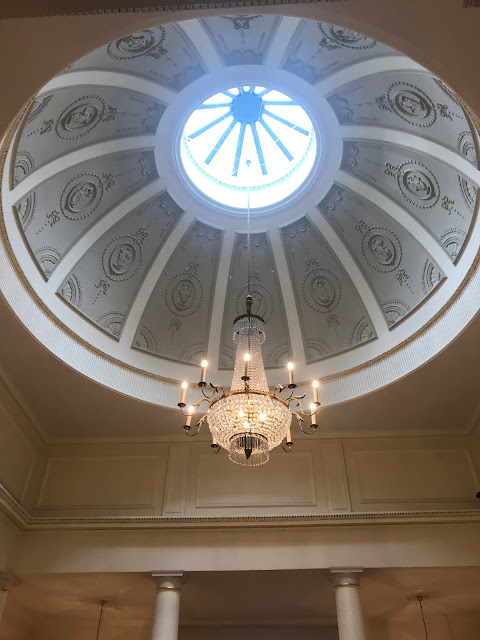 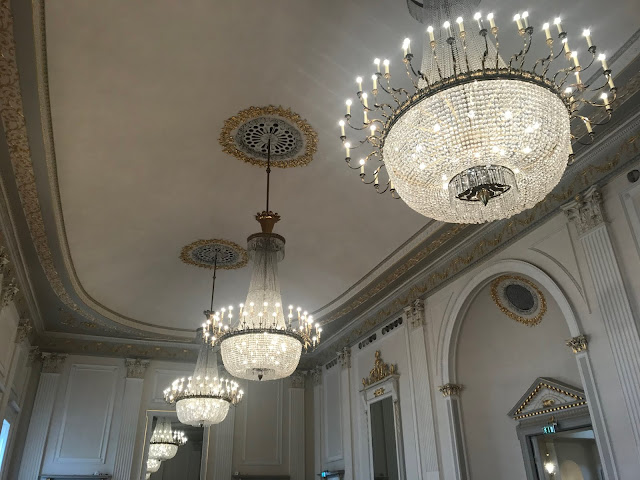 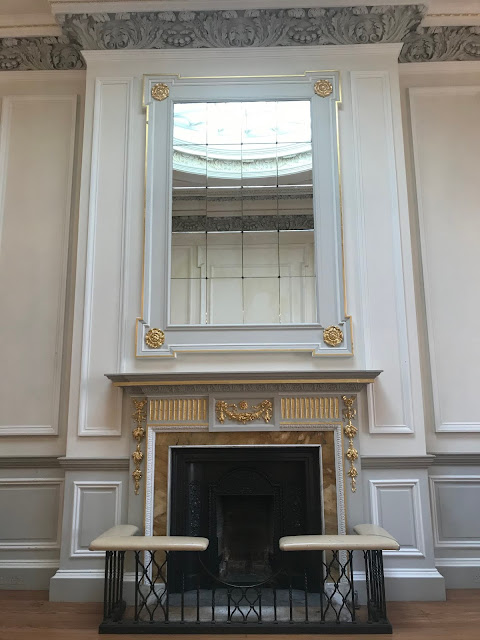 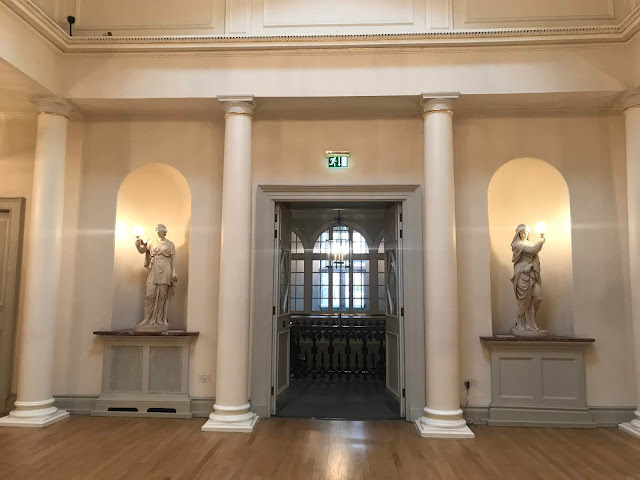 As I said above I visited all three of these buildings in the one weekend, like a lot of similar places opened up for this event it's not necessarily the case that the whole building is viewable so with a little planning beforehand it's very easy to view several places either on the same day or across the weekend. Having done three years of these weekends now I've noticed that different places appear on the listings and open their doors each year so if you know there's somewhere you really want to visit don't delay just in case it's not open the following year.

If you want to find out more beforehand check out the official website here and don't forget to pop a reminder in your diary for closer to next September to see what places will be open. Have a look too at my previous Doors Open Day posts for some future inspiration.
﻿
Doors Open Day Edinburgh festivals and events historic building history museum places to visit Scotland things to do UK
Location: Edinburgh New Town, Edinburgh EH2 1AW, UK