on 23.8.18
If you want to get away from Edinburgh for a day there are many places on its doorstep that are well worth a visit, one of these is the lovely little Rosslyn chapel. By car it's about a half hour drive from Edinburgh but you can also take a bus from the city centre to the nearby village of Roslin and then it's just a short walk to the chapel.

Even if you don't think you are and have never visited Scotland you'll most likely be quite familiar with this chapel. Think of the book and film, The Da Vinci Code and you'll soon realise why perhaps it rings some bells for you. Not surprisingly this connection has firmly put this little chapel on the map and it now welcomes a huge number of visitors every year. 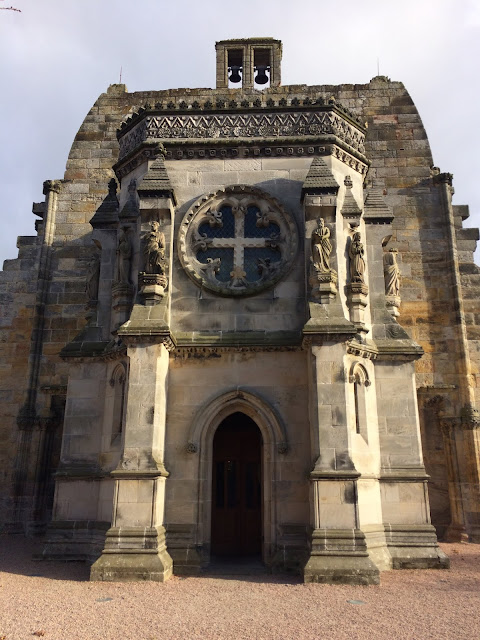 The chapel dates from the 15th century and was founded by William Sinclair the 1st Earl of Caithness. It was originally dedicated as a Catholic collegiate church of St Matthew but after the Scottish Reformation and with the order to destroy the altars Roman Catholic worship in the chapel came to an end. Although the Sinclair family continued to be Roman Catholics until the 18th century the chapel was abandoned and remained closed to public worship until 1861 when it was reopened as a place of worship according to the rites of the Scottish Episcopal church. 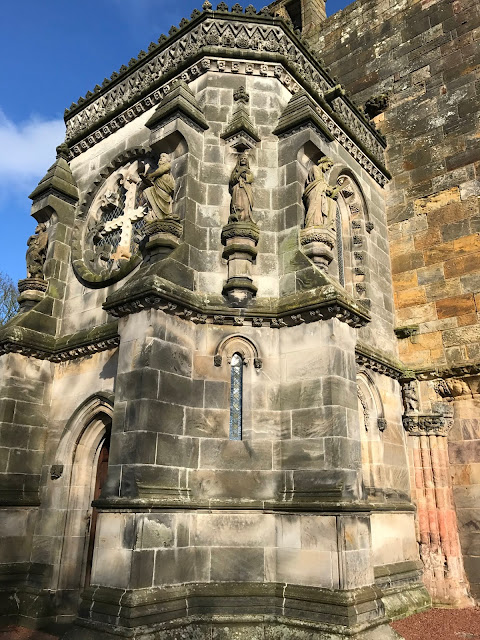 The original plans for the church have never been found but it is known that the building, intended to be in the shape of a cross, was never completed and all that actually exists is the choir so it's no wonder that on arrival it seems so tiny. Foundations for the nave and transepts were found in the 19th century which stretched a further 90 feet possibly giving some indication of its intended size.

As I mentioned the chapel was abandoned for many years and as a result fell into an advanced state of decay. With its surrounding landscape and in its overgrown romantic state it eventually became a muse for artists, poets and writers, Robert Burns, Alexander Nasmyth, William and Dorothy Wordsworth all visited and Sir Walter Scott was inspired to write the poem, 'The Lay of the Last Minstrel'. In 1842 Queen Victoria visited the chapel and expressed a wish that it should be preserved. Restoration work was carried out and the chapel was rededicated in 1862 with Sunday services being held there for the first time in 270 years. Since that time much more restoration has been required in order to have the chapel looking as it now does. The most extensive period of conservation took place between 1997 and 2013 which included work to the roof, the stone, the carvings (of which there are many) and the stained glass. 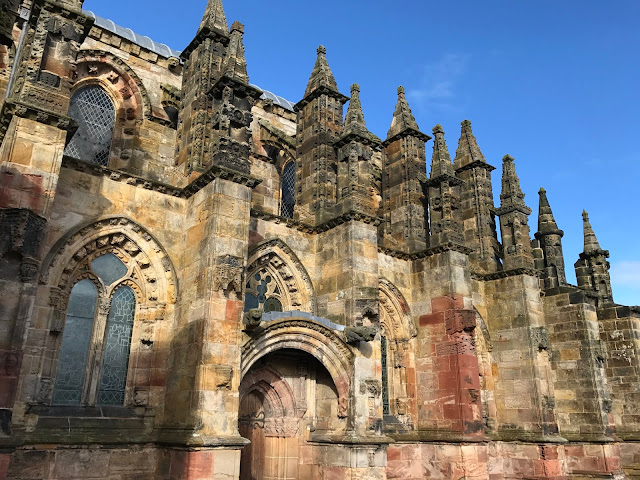 A quick glance at the photos in this post will show how many carvings there are on the outside of the building. Whilst the outside is eye catching the sheer amount of intricate carvings on the inside is quite amazing, but as photography inside is banned you'll have to visit for yourself rather than just take my word for it. If you do visit it is advisable to wait for one of the regular guided talks which makes the entrance fee, which goes towards the continued preservation of the building, all the more worth it.

The talks tell you the history of the chapel but also a lot more about some of the many stories and possible imagery (some of the understanding of what everything siginfies inevitably being lost over time) behind all those carvings in the building. Every time I've been we've waited for the talks and I don't think we've heard the same one twice there are literally so many carvings to see inside the guides always manage to pick different ones to talk about each time. I'm not going to ruin it for you but listen out for stories including that of the maize or possibly Indian corn carving and the intriguing story behind this given that Indian corn originates from North America which wasn't discovered by Christopher Columbus until 1492 some fifty years after the chapel was built. Or the famous tale of the poor apprentice mason who was working on the chapel and, of course, there are many green man carvings. The more of which you look for the more and more of them you seem to find. 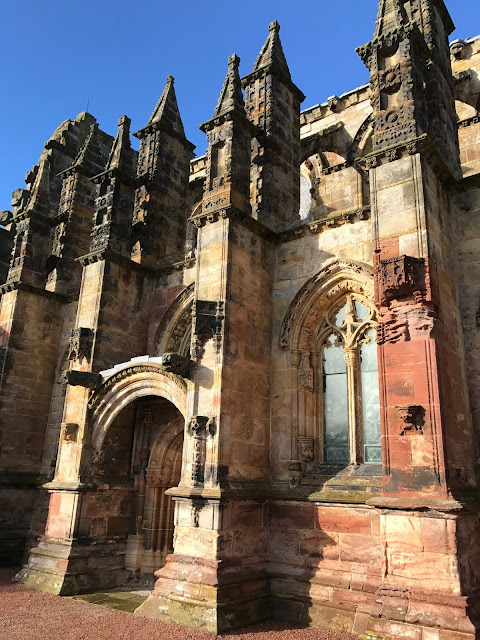 Another little extra to any visit is the chance that you might see William the chapel cat. If I'm right he actually belongs to someone in the village but who can blame him for strolling up to the chapel everyday to sleep besides all those warm pipes and, of course, enjoy a bit of fuss from the many visitors. William has his own little bed inside so keep an eye out for him if you visit. I also couldn't write a post about a visit to Rosslyn chapel and not mention the coffee shop, the combination of great views and some yummy cake is hard to beat, make sure you stop there on your visit.

Rosslyn chapel is a lovely little place to visit and being so close to Edinburgh it's easy to do a little day trip, visit the chapel and go exploring around the area too. We've taken several visitors there and they've all loved the place, being wowed by it's beauty inside, learning lots from the informative guides and, of course, enjoying the chance to keep a look out for William. Regardless of what your reason for visiting is, whether it's because of its Da Vinci Code links, an interest in history or just to get out of Edinburgh for awhile I don't think you'll be disappointed.