on 4.4.18
All too soon it was the last day of our trip and we were heading back to Edinburgh. Luckily though the weather was gorgeous and yet again Scotland came up trumps with some beautiful scenery to send us home. This was the day we knew we were heading back home as we finally saw loads of people and cars, especially once we got to Glen Coe! The beautiful weather had clearly also brought lots out to do a bit of 'munro bagging'. I didn't know what that meant either until I moved to Scotland but munro's are the name for mountains over 3000 feet in Scotland and munro bagging is when people go and climb them, 'bagging' it once you reach the summit. As well as the climbers there were also lots and lots of people out with their drones taking, I imagine, some stunning photos of the Glen Coe area. 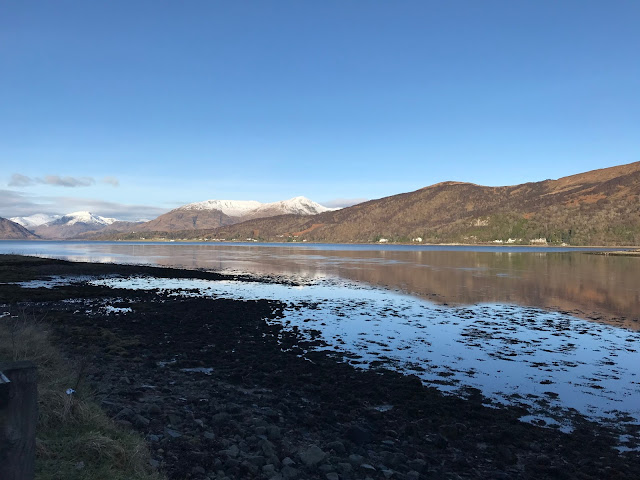 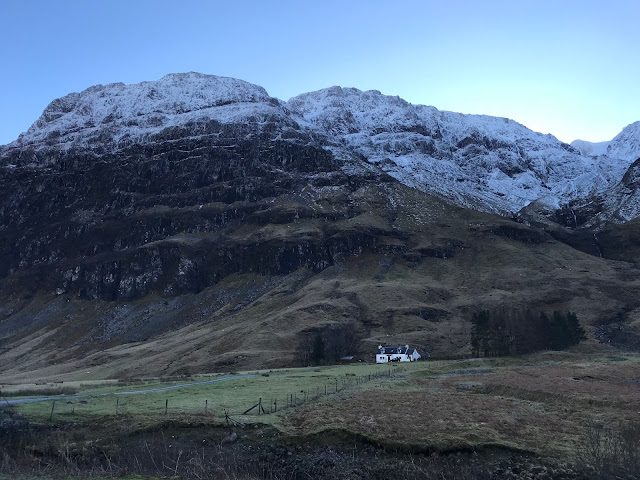 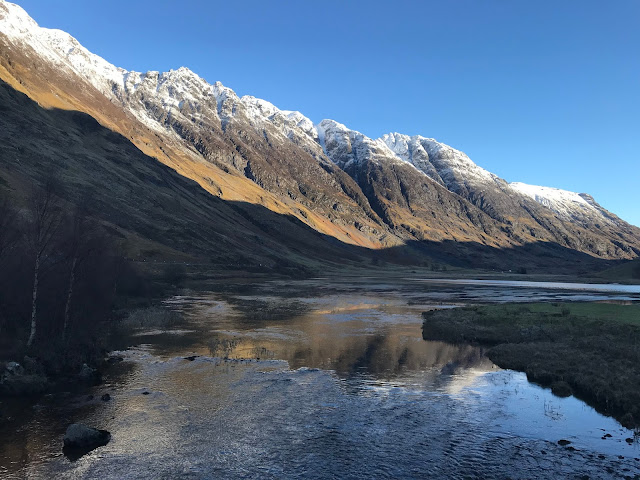 Even if you've never visited Scotland you are likely to have heard of Glen Coe, a glen, like many of Scotland's, of volcanic origins, but it's probably for the Glencoe Massacre that you'll know it best. On the 13 February 1692, in the aftermath of the first Jacobite uprising of 1689, thirty-eight unarmed men from the Clan MacDonald of Glencoe were killed by Government forces billeted with them. This was on the grounds of the Clan Chief's failure to sign a pledge of allegiance before the 1 January 1692 to the new monarchs William lll of England and ll of Scotland and Mary ll. Most of the Clan did escape the initial slaughter only for many to then perish in the surrounding hills and mountains due to a lack of food and shelter as their houses had been burnt down. The chief had intended to sign the oath but severe snowstorms had prevented him from doing so, despite the Government knowing this they decided that an example needed to be made and the massacre went ahead regardless. 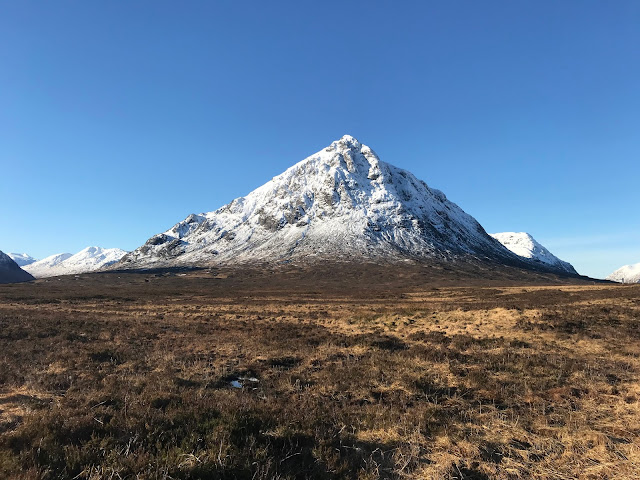 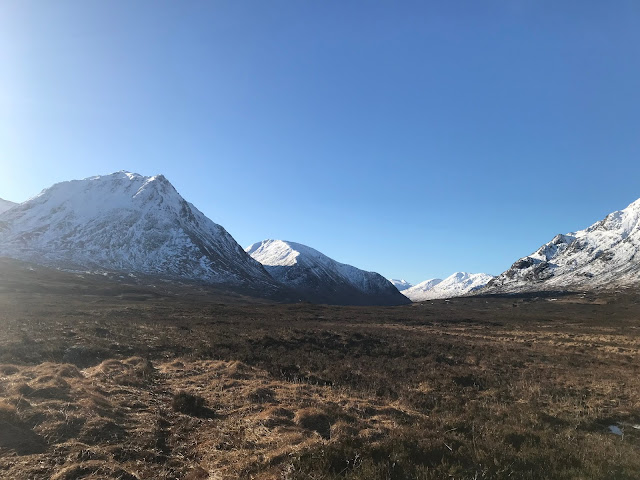 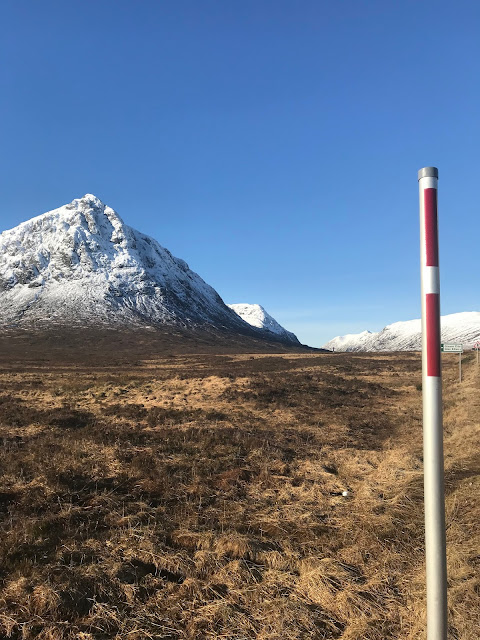 The beauty and grandeur of Glen Coe is undeniable and was helped all the more by stunning blue skies and the sun shining off snow capped peaks on our visit. It is named after the River Coe that runs through it. The name of the river possibly predates the Gaelic language as its meaning is not known though its possible that it stems from an individual personal name, Comhan. As we headed southwards we passed right through the middle of all Glen Coe's mountain splendour surrounding us, past deep gorges and waterfalls crashing down right besides the road. As I mentioned it's a popular spot with mountain climbers and is an area with many famous climbing spots, including the Three Sisters and the Aonach Eagach ridge. Needless to say though we weren't attempting any of that, we were just happy to enjoy the magnificence of the views around us.

As we headed through the Pass of Glencoe and the narrow valley with its soaring mountains we eventually entered into the very contrasting Moor of Rannoch. This is the largest area of moorland in Britain, something that surprised me as I've always assumed the moors in Yorkshire and the west country would take this honour. It is full of lochs and peat bogs, everything you'd expect of a barren and uninhabited moor, a true wilderness, though one that is teeming with wildlife. If you don't have a car to traverse the road through the moor you can take the train across some of it, one of the most remote lines in the UK and one I imagine that gives you some fantastic scenery too. 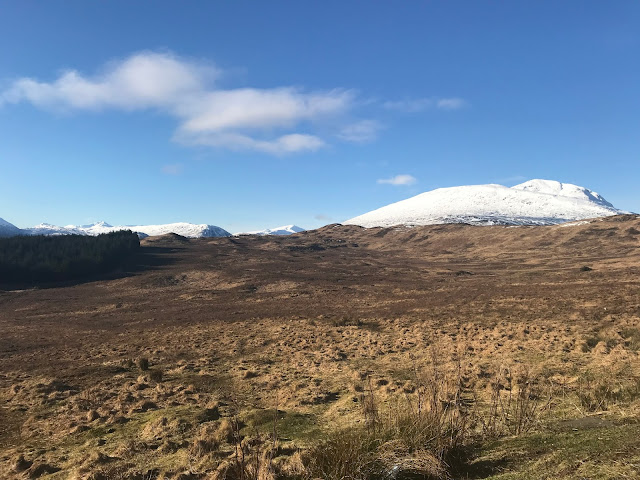 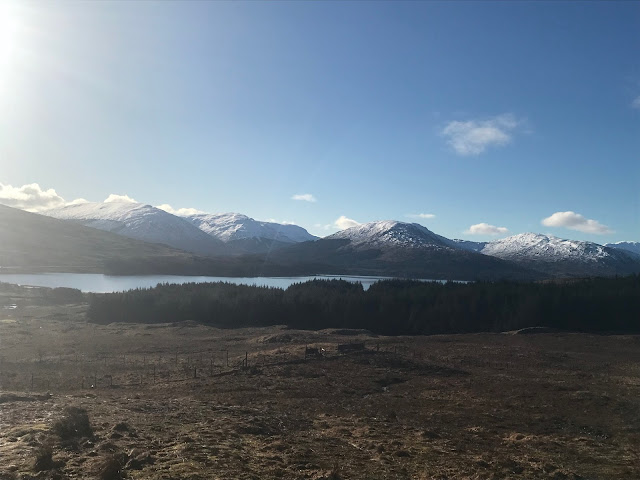 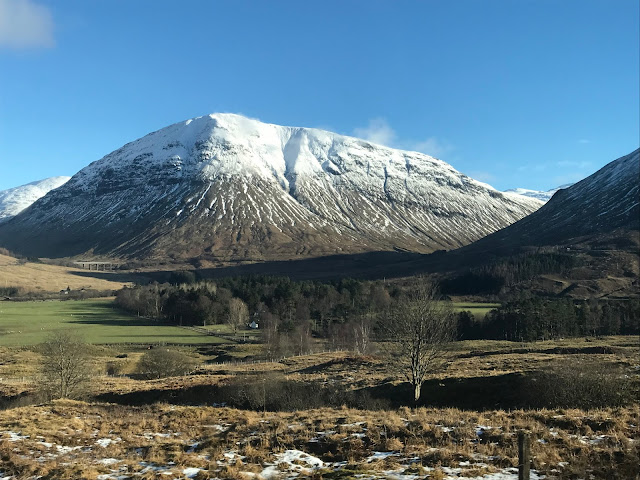 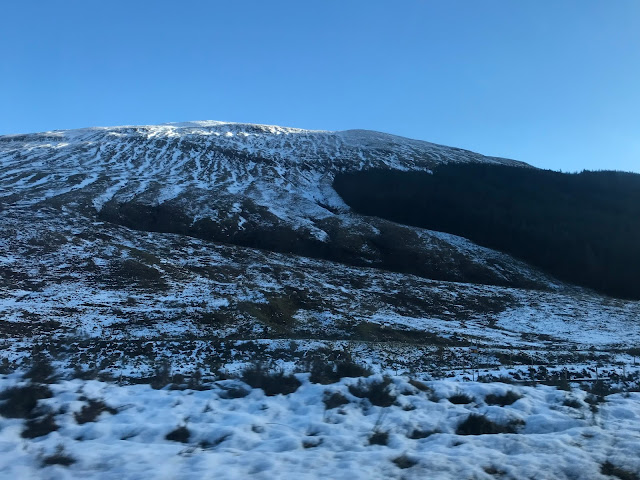 Leaving the moor brought us gradually back into larger settlements and more major and busier roads as we eventually skirted around the Trossachs making our way back to Edinburgh. It was a lovely few days and great to make a return to this part of Scotland after so long. Words really can't describe just how beautiful it is, we were spoilt for natural beauty. I loved that we were able to get away from it all for just a few days, for a large chunk of time with no phone signal, 3G or 4G so there just was nothing else for it but to drink in all the magnificence of the Scottish Highlands.

Though we didn't follow the North Coast 500 route in its entirety what we did do was breath-taking and it's well worth doing if you fancy a road trip around the north of Scotland. Whilst we may have taken a risk going during the Scottish winter, and although we pretty much saw every type of weather imaginable, we were also very lucky especially when you think about how much snow we've had since, I write that as I've been watching the snow falling again in Edinburgh in April today. Of course, going at that time of year meant we definitely didn't have to do much battling with other tourists and had far more freedom to pull over and take a break pretty much wherever we fancied. If you've thought about a trip to the Scottish Highlands but have been putting it off don't do so any longer is my advice!

If you missed any of my other posts about our Scottish Highlands adventure, take a look here.