Message from the Skies

on 10.1.18
Like a lot of events happening in Edinburgh I stumbled upon this one via a post I saw on Twitter and was immediately interested. So much so that I actually decided to do the walk and take the literary journey around the city that very same evening. 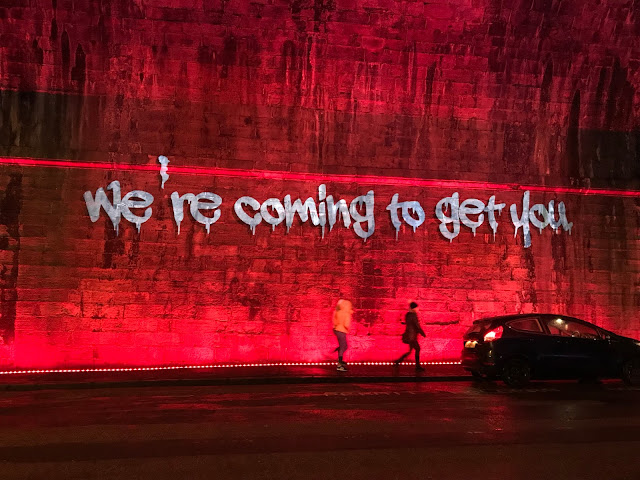 If you haven't heard about it, Message from the Skies is a series of projections on some of Edinburgh's buildings and landmarks (you may well have already seen them and wondered what it was all about) taking you on a literary journey around the city and incorporates in it a short story, New Year's Resurrection, by Scottish writer Val McDermid. Edinburgh has a famous literary tradition, you'll be familiar with Sir Walter Scott, Robert Louis Stevenson, Sir Arthur Conan Doyle to name just a few, all born here and all successful writers. But have you heard of Susan Ferrier, a contemporary of Robert Burns and considered Scotland's Jane Austen? Well, if not, this is your chance to discover her and some of the other female writers from the city.

In order to enjoy the journey fully there is a free app you can download (just search Message from the Skies) to guide you around, as you reach each point you'll then unlock the next chapter of the story. The app translates into seven languages as well as also having an audio description for the visually impaired. I also liked the fact that as you unlocked each part what you see on the projection is also available to then re-read again through the app as and when you want. As you unlock the next chapter as you move around the city from location to location it also means that, if you want, you can pause your journey at any point and pick it up again another night. I initially intended to do it all in one evening but I probably picked the worst two evenings weather wise (torrential rain on both) and as one chapter took me quite close to home and I was soaked I made the decision to finish for the night and carry on the next. Getting so wet also re-emphasised to me the plus of being able to re-read the chapters in the comfort and warmth of my own home. Despite the weather though the projections and the story that is told were well worth it. I admit to not knowing of Susan Ferrier before but this left me definitely wanting to read some of what she and others wrote.

If you want to enjoy Message from the Skies for yourself it's on now until 25 January 2018 with the projections showing from 5pm to 10pm nightly. As you may have gathered it's an outdoor, all weather event so go prepared!