on 31.7.17
St. Andrews was somewhere I knew predominantly for its connection to golf and latterly as being the location where a certain royal couple met whilst at university there. I'm still learning with regards to my geography of Scotland so wasn't altogether sure where it was in relation to Edinburgh but it's not actually that far and by car it can be reached in about an hour and a half. Asides from the golf, university and royal connections though there's plenty of other things there to make it a worthwhile visit.

We've actually been two times since moving up here, our first visit was an overnight stay and on the second we took a visiting friend for the day. We don't have a car, you don't really need one in Edinburgh as it's a pretty compact city, but every now and again my husband will get a hire car for the weekend. This will sometimes be to do those inevitable jobs that do require a car (i.e. going to the tip) but mainly so we can go a little further afield to explore more of Scotland.

St. Andrews is right on the coast and the weather the weekend of our first visit was certainly quite ferocious, nonetheless though I really enjoyed it just because it was a little wild. I've always loved being by the sea so seeing the waves whipping up against the shoreline was really quite something. Before we got to the cliff tops and coastal areas of the town though we visited the ruins of St. Andrews cathedral, something that, if you're interested in history, may be one of the first things you do on arriving as you can't fail to miss the striking remains of the cathedral as you enter the town. It was built in 1158 and became the centre of the Medieval Catholic church in Scotland. It fell into disuse and eventual ruin after Catholic mass was outlawed during the 16th-Century Scottish Reformation. Although now a ruin it's still a pretty imposing sight, I can't imagine how grand it must have looked in all its original glory, and the ruins confirm that it is the largest church to have been built in Scotland. As a visitor you can walk in amongst the ruins and graveyard and get a taste first-hand of its immense size, various parts of the building are also marked out with information plaques to guide you through. 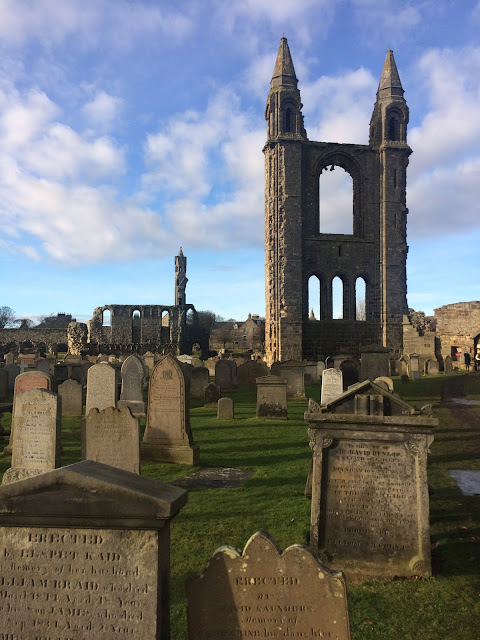 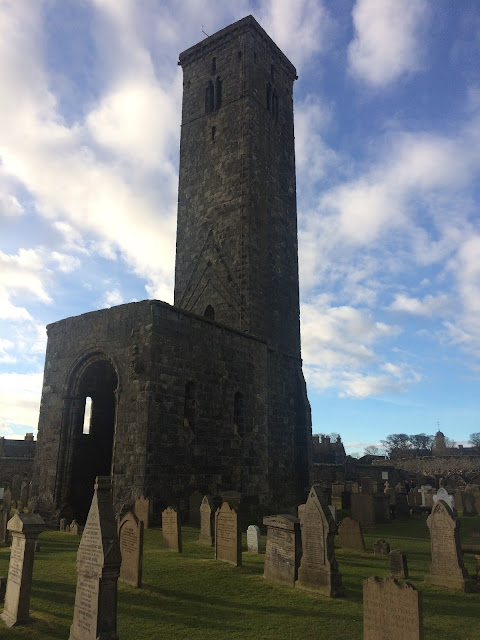 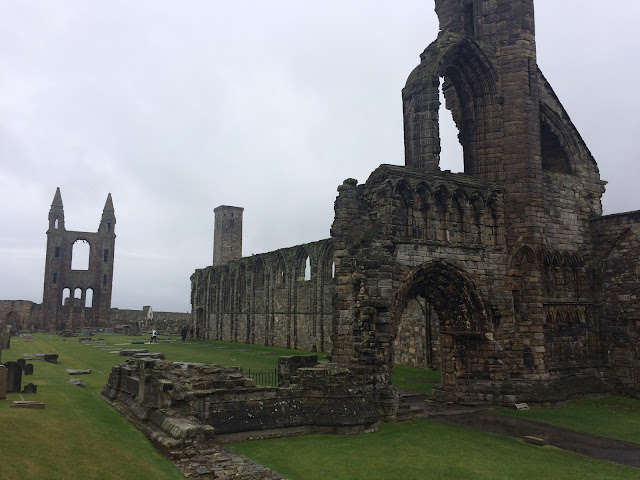 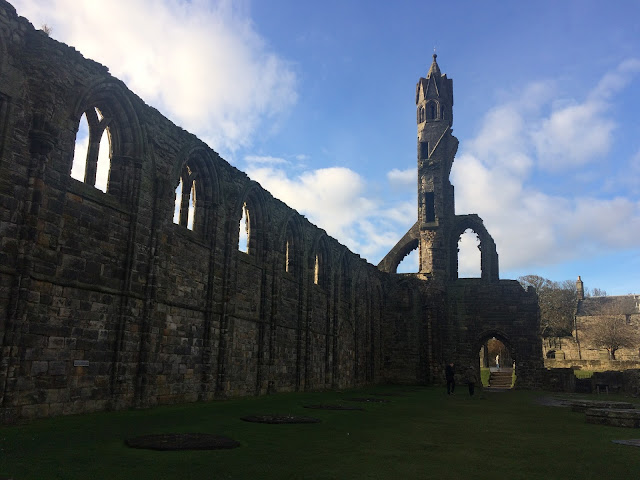 From the ruins of the cathedral it's easy to either follow the path towards the coast or head back into the pretty town, full of cobbled streets and tempting shops. We opted to head towards the cliff edge and the harbour first before heading back to the town. The harbour is centuries old dating back, not unsurprisingly, to the first beginnings of a settlement in the area.  From Medieval times up to the 16th century the harbour saw considerable development with the town becoming an important academic, ecclesiastical and trading centre. First time around the weather provided us with some dramatic scenery as the waves battered the cliffs and harbour wall, our second visit was a stark contrast with almost millpond like conditions out at sea. 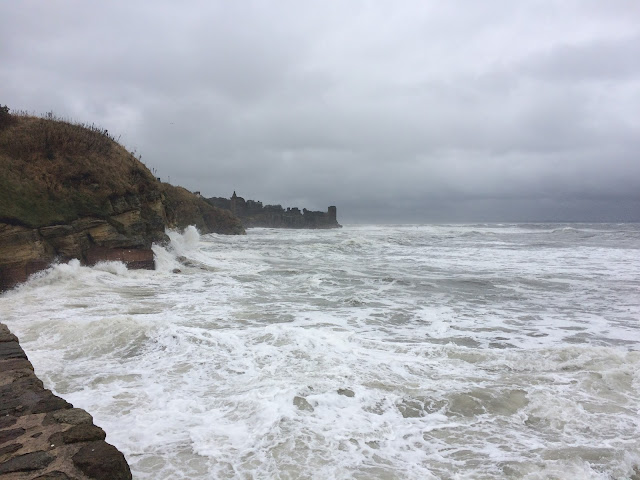 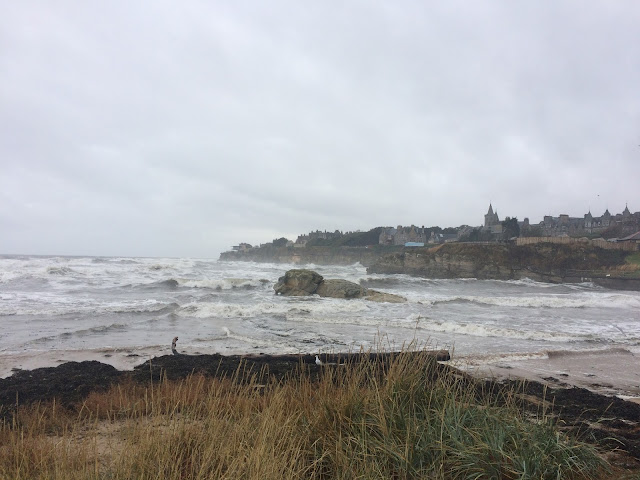 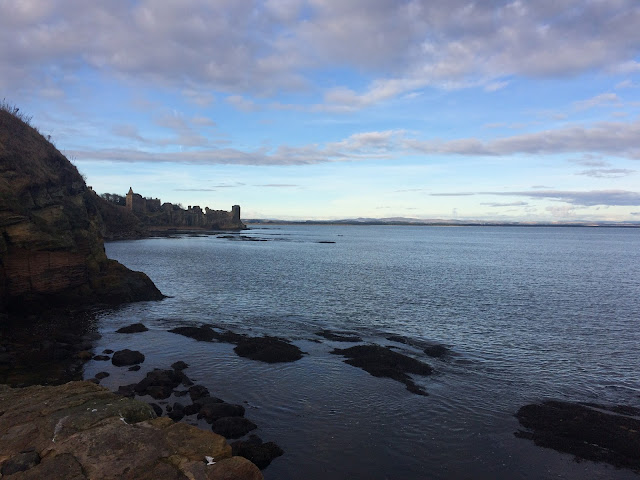 If you look carefully in the photos above you should be able to spot a building in the distance that looks a bit like a church, it's actually St. Andrews castle which is a short walk back along the coastline from the harbour. The castle, now a ruin, is perched right on the cliff edge overlooking a small beach and the sea beyond. The castle has been used as a fortress, a prison and a palace, it was destroyed and rebuilt several times during the wars of Scottish independence as it changed hands between the Scots and the English. From the castle it's then just a short walk into the town centre, a good place to find a lunch spot. 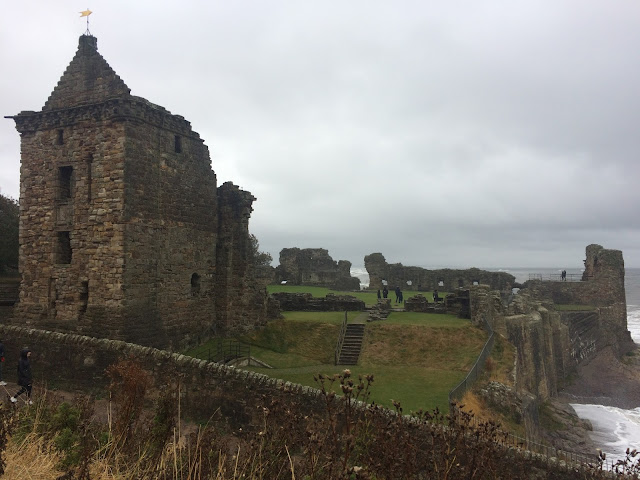 Lunch had, we jumped into our hire car and headed towards the famous golf courses. There are several courses, perhaps the most famous one being the Old course. I'm not really interested in golf and certainly don't pretend to know anything about it but it was fun to walk around a bit of the course and to see the club house from the outside obviously, not being a member. There is a golfing museum there too and though we didn't go into that they do have a very nice café which is well worth a visit for a cup of something and some good cake. If you're interested in golf however St. Andrews obviously makes a great spot for indulging your passion.

With St. Andrews being surprisingly close to Edinburgh it's easy to go for the day or for a night away. You don't need to be a golf fan to head there as there's plenty to see and do that doesn't involve a golf club. Have you been? What's your favourite part about St. Andrews?