Cathedrals, Champagne and a Touch of Christmas

on 23.12.16
A couple of weekends back I went over to Reims in France with my Mum and some other members of my family for a weekend break to take the chance to see the Christmas markets and see a little of this part of France too. Being back in the UK means it's much easier to arrange things like this with family (the last time I went to a market was just before we moved out to Singapore) so I was really looking forward to it and to spending some time with them.

We set off early on Friday (I'd gone down to Kent from Edinburgh the day before), travelling via the Channel Tunnel, and arrived late afternoon. Our first afternoon/evening was spent exploring a little of the Christmas market, apparently one of the biggest in France, and then enjoying a delicious meal at a local restaurant. In fact we enjoyed the hospitality of that restaurant so much we returned for the next two nights as well culminating in them being really lovely and giving us some complimentary drinks on our final evening.

Asides from the markets we also visited the quite beautiful cathedral, the Notre-Dame de Reims which is where the Kings of France were crowned. The current cathedral replaced an older one which was destroyed by fire in 1211. Further fire caused by German shellfire destroyed parts of the current cathedral at the outbreak of the First World War. Restoration work began in 1919 and the cathedral was fully opened again in 1938. The outside of the cathedral is highly decorated as you can see in the photo above and in the more detailed close up below. It really is quite beautiful up close both inside and out and not to be missed if you find yourself in this part of France. 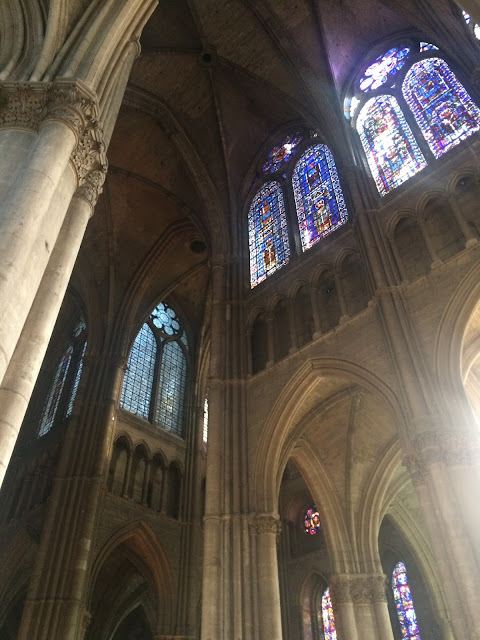 We spent quite a bit of time in the cathedral during our stay, naturally visiting it to look around but also for a free music event that my Aunt spotted was happening and on one evening to watch a light and music show projected on to the cathedral. This was quite clever and partly showed the construction of the cathedral by the architects (through light projections) and the putting together of the arches, windows etc. It wasn't specifically Christmas related so I'm not sure if this is just on during the festive period or if it is something that they regularly do throughout the year.

As you may also know Reims is in the area of France known for its champagne. Whilst we didn't have time to visit any of the surrounding champagne houses we couldn't not enjoy some champagne, when in Rome, (or Reims 😂) as the saying goes. Despite not going to a champagne house our hotel bar had a very extensive selection of champagnes to choose from so we didn't have too much difficulty choosing. We settled on a rosé champagne, partly because neither my husband or my cousin's partner (neither big rosé fans) were with us. The bottle was soon finished and more champagne was subsequently enjoyed at our restaurant the following evening. 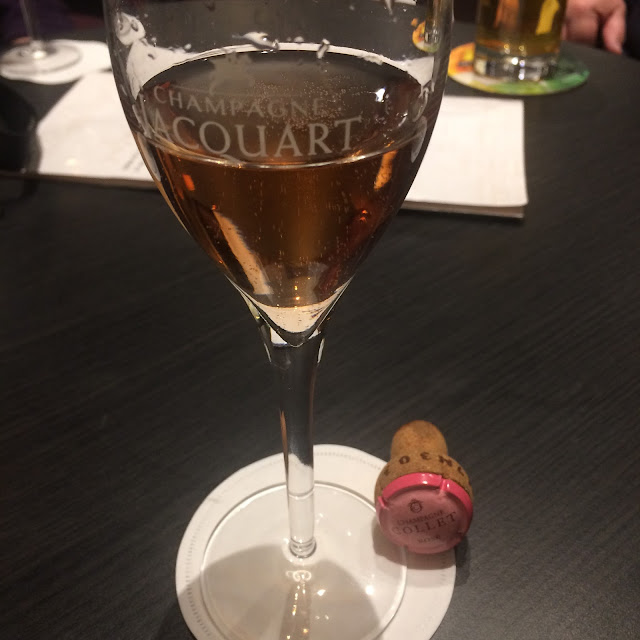 Although we were only away for a long weekend we squeezed in a day trip away from Reims too to visit Troyes. Troyes has existed since Roman times and there are many beautiful old half timbered houses, mainly from the 16th century, there. It also has a stunning cathedral which, of course, we visited. We actually went to Troyes as we thought there were Christmas markets there. It turns out that there are but only for one weekend each year and we came a weekend too early. However we still had a good day exploring the place and really weren't too worried by the mistake.


The cathedral is a national monument of France, in fact before visiting we stopped for a coffee in a nearby café and our waiter told us we had to visit it as it was very important. The site of the cathedral has been used as a religious site since the 4th Century with a cathedral being built in the 9th Century. The cathedral has been replaced a couple of times over the centuries, with the construction of the present Gothic cathedral beginning in 1208 and continuing until the 17th Century. The cathedral only has one tower (as you can see in the photo below) the construction of the second tower was never started so technically the cathedral is still unfinished. This cathedral, like Reims, has some beautiful stained glass windows and it too was quite breath-taking to walk around inside.

We had a great weekend away in Reims, an advantage of being back in the UK now is that it is much easier to take long weekends in Europe, something I hope we can take more advantage of in the future. As I said above it's also nice and much easier to be able to make plans like this with extended family too and it was really enjoyable to get away with some of them for a few days. Where do you recommend I visit next?